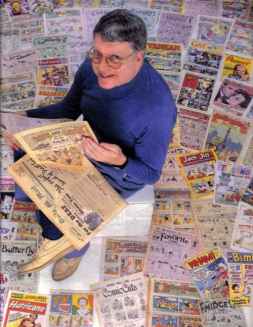 DENIS GIFFORD (26 December 1927 – 18 May 2000) was a British writer, broadcaster, journalist, comic artist and historian of film, comics, television and radio. In his lengthy career, he wrote and drew for British comics; wrote more than fifty books on the creators, performers, characters and history of popular media; devised, compiled and contributed to popular programmes for radio and television; and directed several short films. Gifford was also a major comics collector, owning what was perhaps the largest collection of British comics in the world.

Gifford’s work in the history of film and comics, particularly in Britain, provided an account of the work in those media of previously unattempted scope, discovering countless lost films and titles and identifying numerous uncredited creators. He was particularly interested in the early stages in film and comics history, for which records were scarce and unreliable, and his own vast collection was an invaluable source. Gifford produced detailed filmographies of every traceable fiction, non-fiction and animated film ever released in the UK, and of early animated films in the US.
He compiled the first comics catalogue attempting to list every comic ever published in the UK, as well as the first price guide for British comics. His research into the early development of comics and cinema laid the groundwork for their academic study, and his reference works remain key texts in the fields.

Gifford was also a cartoonist and comic artist who worked for numerous titles, mostly for British comics in the 1940s, 50s and 60s. Although these were largely humour strips, he worked in a range of genres including superhero, Western, science fiction and adventure.
Gifford was born in Forest Hill, London, the only son of William Gifford, a printer, and Amelia née Hutchings. He grew up in the prosperous South London suburb of Sydenham, but was evacuated during the war to Tonbridge, Kent.

Gifford attended the South London private school Dulwich College (1939–44), and while a pupil there was an avid comic collector and cartoonist. He produced a comic, The Junior, using heated gelatine and hectograph ink, which he sold for 1d around the school, but had published comics art by the time he was 14 (1942).
Gifford became friends with Bob Monkhouse, a Dulwich schoolmate, fellow schoolboy cartoonist and later TV comedian and presenter, who studied in the year below and also had cartoons published while at the school. Gifford and Monkhouse collaborated on comics writing and drawing, a partnership that was to continue for many years in various forms, including as radio scriptwriters. The two toured together as a comedy act in the south east of England in the late 1940s with Ernie Lower’s West Bees Concert Party, giving charity performances with Monkhouse as the ‘straight man’. Gifford continued drawing during National Service in the Royal Air Force (1946-8), in which he served in the clerical position of ‘AC1 Clerk/Pay Accounts’, and went on to draw the Telestrip cartoon for the London Evening News.
Comic art and comic writing: 1942–82
Gifford’s prolific career as a cartoonist included both newspaper strips and comics, almost entirely for British publishers. His first published work was Magical Monty for All-Fun Comics (1942) at the age of 14, with a contribution to The Dandy the same year, and briefly worked as junior cartoonist for the newspaper Reynold’s News (1944–45). He collaborated on comics writing and drawing with school friend Bob Monkhouse while they were still pupils at Dulwich College together.
After his National Service, Gifford drew the Telestrip cartoon for the London Evening News, continuing in Rex magazine (1971–72), and on bubblegum and cigarette sweet packets. Other newspaper strips were produced by Gifford for Empire State News and Sunday Dispatch.
Gifford’s early work was with D.C. Thomson and the majority of his work was for humour strips, but he went on to cover various genres and styles, including adventure, detective, science fiction, Western and superheroes.