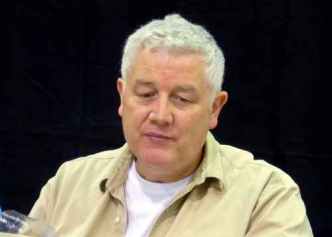 ALAN DAVIS (born 18 June) is an English writer and artist of comic books, known for his work on titles such as Captain Britain, The Uncanny X-Men, ClanDestine, Excalibur, JLA: The Nail and JLA: Another Nail.
Davis began his career in comics on an English fanzine. His first professional work was a strip called The Crusader in Frantic Magazine for Dez Skinn’s revamped Marvel UK line.
Davis’s big break was drawing the revamped Captain Britain story in The Mighty World of Marvel. Due to his inexperience, Davis did not leave enough room for word balloons in the five-page first installment, so it had to be recut to six pages. Afterwards, Alan Moore took over writing duties on Captain Britain. He drew 14 issues of the monthly Captain Britain title, which was later reprinted in trade paperback. Davis and Moore formed a close working partnership as creators; they also created D.R. and Quinch for 2000AD. Later, Davis replaced Garry Leach on Marvelman in Warrior and yet again worked with Moore. He also drew the story “Harry Twenty on the High Rock” in 2000AD.

In 1985 Davis received his big break in the United States when he was hired by DC Comics to draw Batman and the Outsiders, written by Mike W. Barr. Davis took over from Jim Aparo, who launch the direct market version of the title. His work proved popular enough for him to be assigned artistic duties on DC’s flagship title Detective Comics in 1986, again with Barr writing. During the “Batman: Year Two” storyline, however, Davis encountered difficulties with his editor and left after the first issue of the four-issue storyline. The remaining three issues were illustrated by Todd McFarlane. In the story, which featured Joe Chill, the murderer of Batman’s parents, Barr wanted Chill to have a large gun. He asked Davis to draw him with a Mauser with an extended barrel, similar to the one used by the Paul Kirk version of Manhunter. However, after Davis rendered Chill with this firearm throughout Detective Comics #575 and on its cover, he obtained copies of the pages for Batman #404 by Frank Miller and David Mazzucchelli, which was scheduled to be released months before the “Year Two” storyline, and saw that Chill was depicted using a smaller handgun without the extended barrel. When asked by editorial to redraw the gun in his artwork, Davis refused. Dick Giordano redrew the gun in the artwork.
Davis accepted an offer by Uncanny X-Men writer Chris Claremont to work on Marvel Comics’ X-Men books. With Claremont, Davis drew two New Mutants Annuals and three issues for Uncanny X-Men. In 1987 the duo launched the monthly series Excalibur, which featured a team consisting of Captain Britain and Meggan together with former X-Men members Kitty Pryde, Nightcrawler and Rachel Summers. The stories, set in England, saw appearances by many characters from Moore’s and Davis’ Captain Britain stories of the early 1980s, including the Crazy Gang and the Technet. Davis’ pencils were inked by Paul Neary and, later, Mark Farmer. Davis left with issue 24 due to deadline pressures, but returned with issue 42, this time also as writer. During this second run, according to Davis, “[Editor] Terry Kavanagh spoiled me, gave me near total freedom, and encouraged me to experiment.” Among the new characters he created for his second run on the title were Feron, Cerise, Micromax and Kylun.

In 1994 Davis created a new series of original characters called the ClanDestine, which featured the Destines, a family of long-lived, magically-powered British superhumans. Davis wrote and penciled the title for the first eight issues. He departed after issue 8, and the series was canceled with issue 12. In 1996 Davis wrote and drew the two issue crossover miniseries X-Men and The ClanDestine.
In 1991, Davis reunited with writer Barr to draw the sequel to “Year Two”, the one-shot Batman: Full Circle. During much of the 1990s Davis drew many of Marvel and DC Comics major characters and titles, including JLA: The Nail and The Avengers. He was also commissioned to write both main X-Men series in 1999 (providing art for X-Men as well), but he left the following year.
Starting in October 2002 he wrote and drew for Marvel Killraven, a six-issues miniseries revamping the title character of the 1970s. After a return to Uncanny X-Men, working again with Claremont, Davis wrote and drew in 2006–2007 a six-issue Fantastic Four: The End limited series for Marvel (not to be confused with a similar one-shot written by Stan Lee and drawn by John Romita Jr). In February 2008, Davis wrote and pencilled a five-part ClanDestine miniseries and the one-shot Thor: Truth of History for Marvel.