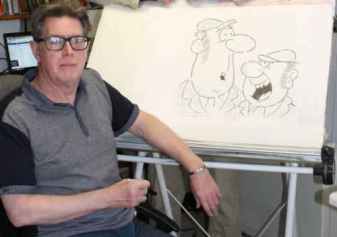 Suffolk-based artist BARRIE APPLEBY has been working for British comic books the 1970s. Coming from Barnsley, Yorkshire, he began his career at age 17, working as an art assistant for the Walt Disney Company in London. He later spent a couple of years in Canada, where he served as art director with a Toronto-based book publisher. He eventually returned to the UK and started working for comic books published by IPC Magazines, Marvel UK and especially DC Thomson.

Among his 1970s features are ‘Terror TV’, ‘Teddy Scare’ and ‘Starr Tour’ in IPC’s Monster Fun and Buster (1976-79). He is probably best-known for creating the two toddler brothers ‘Cuddles and Dimples’ in DC Thomson’s The Dandy from 1986 to 2004. The characters originated in two separate strips, with ‘Cuddles’ appearing in Nutty, Hoot and Dandy (1981-86), and ‘Dimples’ in The Dandy (1984).
He has been a regular in The Beano since the 1970s as one of the artists of ‘Dennis the Menace’ and ‘Roger the Dodger’ (both with intervals), and also with ‘Pirates of the Caribeano’ (2006), ‘London B412’ (2007), ‘Gnasher and Gnipper’ (2014) and ‘Fun Kids’ (2014). Appleby has additionally drawn several strips for Marvel’s ‘The Get Along Gang’ starting in 1985, and the ‘Bananaman’ feature in both the BEEB comic and The Dandy, succeeding John Geering. This is not the Barry Appleby who drew ‘The Gambols’ in the Daily Express.