Jet was a shortlived weekly comic published by IPC in 1971. It lasted for 22 issues before merging into Buster. Its mot enduring strip was Ken Reid’s “Faceache”, which carried on in Buster for some time and is today well-regarded by Reid’s admirers.

In the 1970s IPC Magazines were determined to become the dominant force in British comics and produced numerous titles to achieve that aim. Sadly, many were relatively unsuccessful and short-lived, such as the boys adventure weekly Jet which managed just 22 issues.

Launched at the end of April 1971, Jet is perhaps most memorable today for being the comic where Ken Reid’s excellent Faceache strip began. However, it’s arguable that the fantasy serial Von Hoffman’s Invasion was another very notable strip.

Jet’s 40 pages were a good mixture of adventure and humour strips, with the emphasis on the former. The strips were fairly traditional fare for the time, featuring sport, war, and suchlike. There was a football strip The Sludgemouth Sloggers by Douglas Maxted, another IPC regular.

Partridge’s Patch was a gentle detective story about a rural copper, by Mike Western.

Paddy McGinty’s Goat, taking its name from a song popularised by Val Doonican at the time, featured a shape-shifting alien who spent most of his time as a goat. Not IPC’s finest hour.

The full colour centre pages featured a humour strip, with Mike Lacey doing his best Baxendale impersonation drawing The Kids of Stalag 41. (Toni Goffe took over the art with No.2.)

Crazy Car Capers was clearly inspired by the Hanna-Barbera cartoon Wacky Races that was on TV at the time. Artwork by Solano Lopez.

Ken Reid’s Faceache was the strip that proved to have longevity, continuing into the merged Buster and Jet and remaining a favourite in Buster for many years afterwards.

Bertie Bumpkin, by Terry Bave, was the other single page humour strip in Jet. Much of the humour came from Bertie’s exaggerated accent and phrases, which were translated in footnotes.

Bala the Briton was a rousing historical/mythological saga in the style of Jason and the Argonauts. I’m unsure of the artist on this.

(Information thanks to Andy) 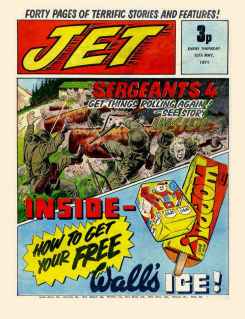 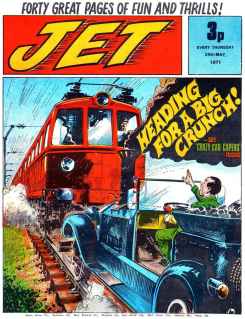 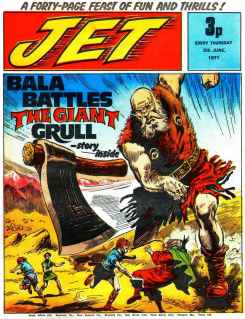 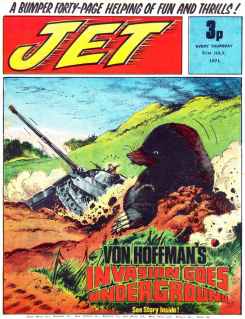 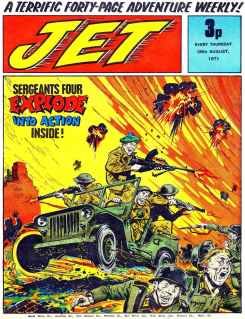 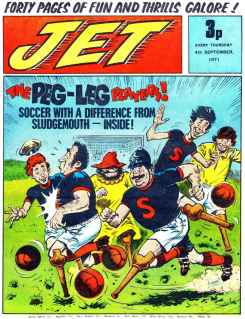 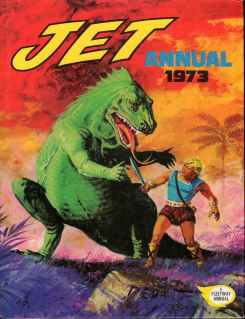